. It is a fish that is made fluorescent by science. We thought that there is something fishy going on, so we checked our favorite source (wikipedia), for more information. 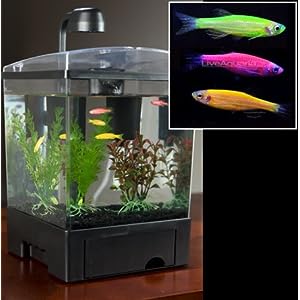 "In 1999, Dr. Zhiyuan Gong and his colleagues at the National University of Singapore were working with a gene that encodes the green fluorescent protein (GFP), originally extracted from a jellyfish, that naturally produced bright green fluorescence. They inserted the gene into a zebrafish embryo, allowing it to integrate into the zebrafish's genome, which caused the fish to be brightly fluorescent under both natural white light and ultraviolet light."

According to the article, apparently, some scientists had the bright idea of making fish glow, probably to try to save the environment and prevent unnatural mutations such as radioactive or glowing fish to emerge from our waters. But then again, who really knows the real purpose, right?

Anyway, after all the experimenting, the end result was what is now known as the GloFish - a genetically modified super guppy (actually a Danio) that has but one super power - and that is it can glow like a jellyfish.

And like any glowing thing, we would assume that these pets can light up a room in a brilliant manner.

A word of warning for those living in California though, if you are thinking of owning this fish, you may find yourself swimming in deep waters as the said State will fry anyone who is caught trying to possess or sell genetically modified fish.

If you are totally hooked with unusual pets(or glowing things), you might find yourself taking the bait and getting the Glofish

Every once in a while, an assortment of very strange products rear their ugly head. And in this case, the ugly head is... well... a rear! A deer's rear to be exact! What we are…
Read More

If owning a replica of a dinasaur skull don't excite you, then you are in luck because we have found an entire website that legally sells dinosaur bones. The great thing about…
Read More

There comes a time in every geek's life that he comes around with a gadget that holds great potential for power! Whether it is used for good or for evil, does it really matter?…
Read More

We all agree that regular plants are kind of lame. But only a handful of things are cooler than dinosaurs and zombies and The Amazing Desktop Dinosaur Plant is the best of both worlds…
Read More

We want to give you a heads up on this new product we discovered - the Emergency Inflatable Brain thing. The first thing that comes into mind is what is it used for? While that question…
Read More

Sundials where invented by the ancients according to normal science, or aliens if you prefer the other science. No matter who made them, it is generally agreed upon that the older…
Read More